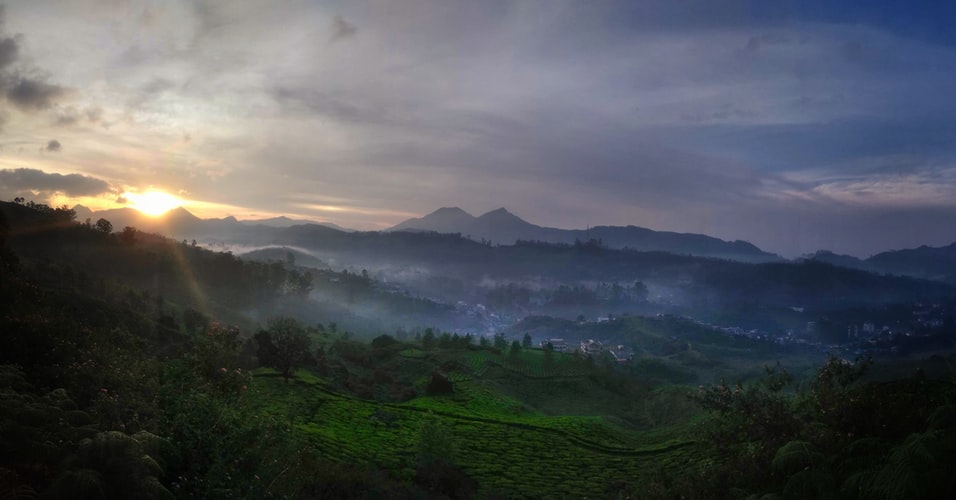 Settled away from the hustle and bustle of Munnar town, there is a village called Vattavada. It is a village that resembles a fairytale landscape with its flowing rivulets, mist-covered hills, mesmerizing valleys, and low lying clouds. Located at a distance of 45 kilometers to the northeast from Munnar town and 52 km from Blanket Hotel, the region offers cool and pleasant weather throughout the year.

It is a welcome change for those looking to beat the heat during the summer months. It is a rain shadow village and is situated in the Devikulam taluk of Idukki district of Kerala, along the eastern side of the Western Ghats.

Perched at a height of 6500 feet above the sea level, Vattavada offers a soothing experience to its visitors. People come to see the low lying clouds, terraced slopes and mist-laden valleys that throng this region. The Vattavada panchayat covers an area of 68 square kilometers that includes areas like Koviloor, Vattavada (meaning land surrounded by hills), Kottakombur (named after a locally famous jaggery seller), Chilanthiyar, Pazhathottam (meaning fruit garden), Kadavari, Adivasikudy, Swamiyarala, Kudalarkudy, Parsalkkadavu and Mulapallam. It is also home to a variety of flora and fauna. The multi-colored butterflies are also a major attraction of this destination.

According to historians the earliest known settlers in the region came from Tamil Nadu, a group of fifteen families that escaped into this region because of the siege of Tipu Sultan’s army. It was under the protection of Poonjar Raja, that these families settled in this region and began cultivating crops after clearing some of the forest land. Another point of historical interest would be the Kalpottakavai which is the name given by the locals to a belt of trees that stood as a natural fortification against the invading British troops. It is said that this tree line was planted by the villagers of Chittivarai village during the siege.

The region is also the only place in Kerala that still sees the practice of the traditional hill rice cultivation. The lower valleys and terraces referred to as ‘pallamvayal’ is used for the cultivation. Almost fifty years ago when the neighboring state of Tamil  Nadu saw a huge number of Eucalyptus trees being planted, the result was a near-complete absorption of water content from the paddy cultivating lands. This led to the farming community to turn to the cultivation of vegetables like carrot, cabbage, beetroot, and cauliflower. Interestingly, Vattavada, because of its cool climate that is consistent throughout the year, is blessed with a lot of vegetable farms and fruit orchards. Famous for its crops which are not seen traditionally in other parts of Kerala, Vattavada boasts of some of the finest varieties of apple, orange, strawberry, blackberry, plums, gooseberry, egg fruits, peach and passion fruit, wild papaya, radish, turnip, and capsicum to name a few. It also sees the cultivation of the rare fruit Loquat, typically seen in the cooler climates of Himachal Pradesh and Japan.

The local community consists of people whose main occupation is agriculture and there is a significant tribal population in the area. Their lifestyle, language, herbal remedies, and art forms are some of the facets that make Vattavada a truly unique fairytale destination. There is a significant tribal population who are settled in the ‘Adivasi Kudi’ (tribal colony). There are four ‘Muthuva’ tribal colonies with Kundalarkudy being the largest tribal colony settlement. There are also settlements at Swamiyarala, Melavalasapetty, and Keezhvalsapetty. These areas are not accessible motor vehicles as there are no proper roads. Tourists visiting Vattavada by private cars must register themselves at the check post of Pambadumshola National Park.

Another attraction is the Periyacholai waterfall which originates from a huge rock and cascades along the rocky hillside.  The water from this waterfall enriches the mineral-rich soil of the region.

While visiting this beautiful village one can indulge in exploring the vegetable plantations and fruit orchards, take a long walk through the hills and take in natural beauty. One can also do some trekking & camping in Pambadum Shola National Park. Vattavada offers trekking trails that can connect you to other tourist destinations like Top Station, Mattupetty, Kanthaloor, and Meesapulimala. Vattavada is also witnessing the famous Neelakurinji flower bloom in all its glory during this year. So, be sure to make magical Vattavada a must-visit location on your next visit to Munnar.

You can easily find accommodation in Munnar when plan to visit Vattavada with us Blanket Hotel and Spa, the best 5-star luxury hotel in Munnar. We offer the best service that guests can avail of in terms of luxury and our excellent guest service executives will make sure you get the best out of your trip to Vattavada in Munnar.